Circuit bending and Hardware hacking – When I saw this as a module choice for year 2 of my Creative Music Technology degree I knew immediately that it would be my 1st choice. It sounds fun and let me tell you … it is!! A lot of fun!!
So the general idea is that you go and buy an electronic, sound generating toy (battery powered only!) and then rewire the circuit board, adding switches, body contacts, potentiometers, buttons etc. to change the way it sounds.
I managed to find a Texas Instruments ‘Speak and Spell’ going cheap on ebay and having had one myself as a kid I thought it would be an ideal choice (also I know that this toy offers many opportunities to mess with the sound.) Reed Ghazala (the father of circuit bending) has hacked many of these and created instruments he calls ‘Incantors’.
Here’s a picture of the hacked ‘Speak and Spell’ 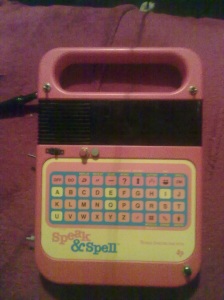 And here’s some of the noises it creates!

Read on for a description of how I did it, including photos should you want to do it yourself.

First thing I realised on checking it when it arrived was that the headphone socket was faulty – it wouldn’t play properly, distorting and crackling away. I was kind of annoyed at this as Ididn’t really want to have to add one, but it transpired that adding a socket to the toy to allow it to be plugged into an externally powered speaker, was one of the tasks for the module. I set about adding a female 3.5mm plug by soldering two pieces of solid core wire to the contacts on the back of the speaker (I purposefully didn’t want to remove the speaker – so I could play with it even if I didn’t have access to an external speaker). 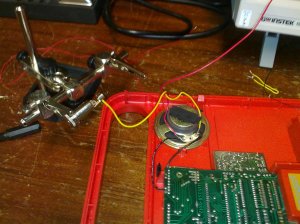 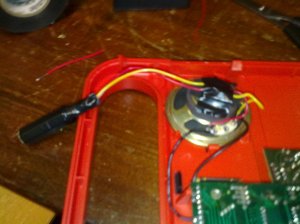 Once it had been hooked up to a speaker I set about finding out which contacts on the circuit board would create the best effects when linked. One method of doing this is to lick the tip of your finger, set the toy playing and then rub your finger over the circuit board – when it sounds interesting start wiring up. Another method is to take a short piece of solid core wire and make connections using that.
My first discovery was a connection that made the sound glitch and so I made the connection and fitted a toggle switch to turn the effect on and off.I then drilled a hole in the case to fit the switch into. 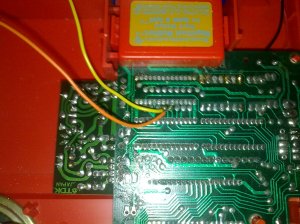 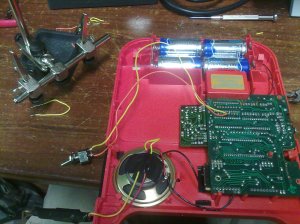 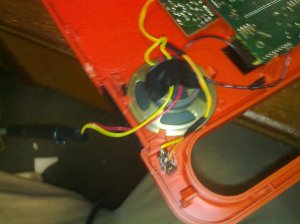 The next discovery caused a nasty sounding distortion – so I again added a switch and fitted into the case, making sure that each step I wrapped each set of wires with some PVC insulating tape to try and keep things neat and tidy (it pretty soon got quite crowded in there!!) 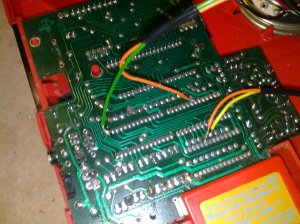 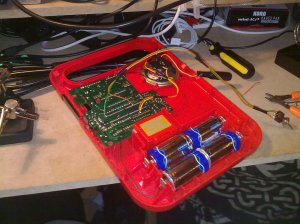 I then found a much better glitch connection, the one I previously made was kind of temperamental and didn’t always work, so I de-soldered the wires and moved them. This new connection sounded better and also works more consistently. 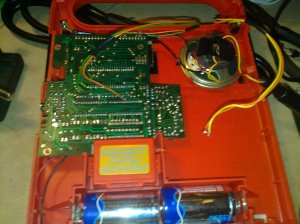 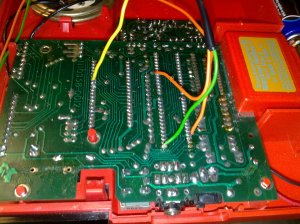 Another connection produced a short loop effect and having run out of toggle switches I used a sliding switch. The red and yellow wires in the centre of the photo is the loop connection. 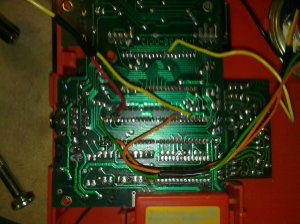 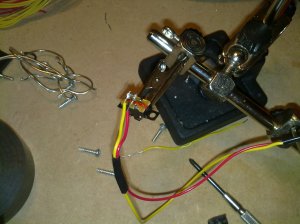 Having played around with the switches I had added was great fun, but I realised that timing was everything when using the loop switch, so I added a ‘normally-open’ button (push to complete connection) by soldering wire to the button and then directly to the switch, to keep the circuit board from getting cluttered or even damaged by my clumsy soldering). I fitted both switch and button into the case.

By this point I was getting quite annoyed with repeatedly removing then replacing the batteries (You will inevitably make connections that crash the toy – shorting the circuit which requires a reset). So I added a ‘normally-closed’ button to one of the wires connected to the battery compartment, enabling me to simply press a button to reset the chip. 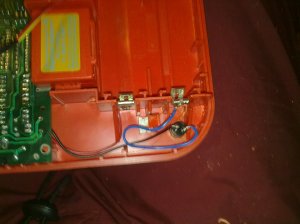 Having found another glitch connection (this time the glitch seemed ‘softer’ – just as erratic, but more obvious pitch changes and including complete phrases from the toys ROM chip). Another switch was added and fitted to the case, this time on the side. 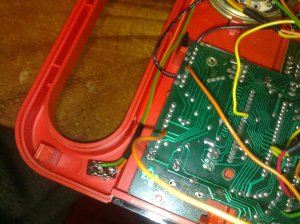 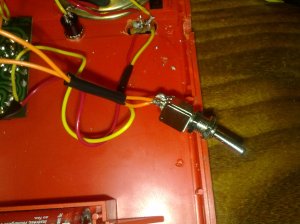 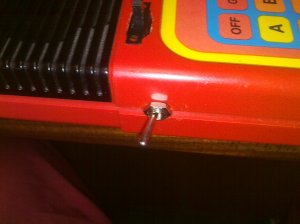 The next effect isn’t made by connecting two seperate parts of the circuit board. It’s make by simply touching one contact – I soldered a single piece of wire to the contact and the other end to an eyelet connector. I drilled a hole in the case and put a standard bolt through the hole, the eyelet was then placed over the bolt and the nut tightened. When the bolt is touched the pitch gets lower – the interesting thing about this one is that the amount of pitch bend depends on how much skin is contact with the bolt. A light touch produces a moderate bend, whilst a more forced touch produces a deeper bend. The pitch bending can be combined with the other effects. The purple wire in the next photo is the pitch bend contact. 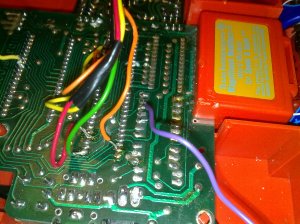 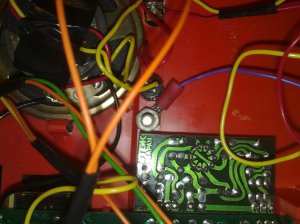 The next circuit bend is also a pitch bender, but this time it is by connecting two contacts. One of them being the same connection used in the body contact bolt pitch bender. After experimenting with different ratings of potentiometer I settled on 220k Ohms (I tried 1k – no sound at all, 10k – no sound at all , 220k and 1M – quite extensive pitch bending, but crashed the toy too easily. ) This hack enables the pitch to be raised, although i’m sure I can find a way of using the pot to lower the pitch too. The 220k Ohm pot also crashes the toy if the pitch is bent too high, but until I can get a better selection of pots this will make do as long as I remain aware if its limitations. I also mounted this on the side of the case. 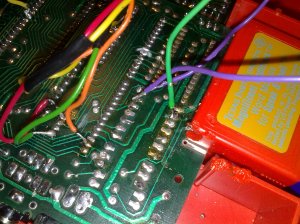 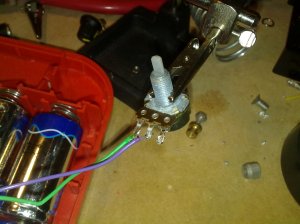 That is it so far, I’m going to carry on looking for more bends for this toy because they sound great! If anyone knows of any especially good ones then let me know!

This entry was posted on February 11, 2011 by toxicdwarf. It was filed under Uncategorized .